The company also plans to soon launch a fifth foreign-language site, in Portuguese, and is considering two more sites, in Chinese and Arabic. Each of its foreign-language sites offers a “localized buying experience with language, currency settings and available payment methods designed for the particular audience,” says Dimitry Peregudov, chief gift officer. 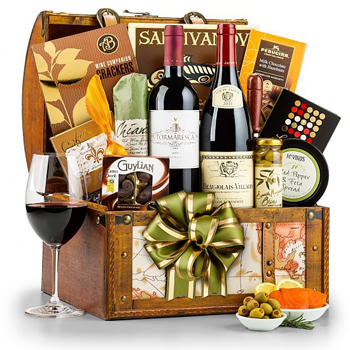 The e-commerce company’s revenue, meanwhile, is on a strong growth track and expected to reach about $4 million this year, up about 36.5% from $2.93 million in 2013. The retailer delivers fruit baskets, flowers and personal or corporate gift baskets to customers in more than 180 countries.

About 70% of the company’s total business is in B2B sales, Peregudov says, and most orders are placed from the U.S. to send to other countries. Earlier this year the company launched a B2B mobile site, which is currently only available in English. It also plans to release in 2015 a mobile app for consumers.

GiftBasketsOverseas.com corporate accounts also include brands such as Dell Inc., Microsoft Corp. and Walt Disney Co., which are ranked Nos. 10, 92 and 84, respectively, in the Internet Retailer Top 500, which ranks companies by the annual web sales.