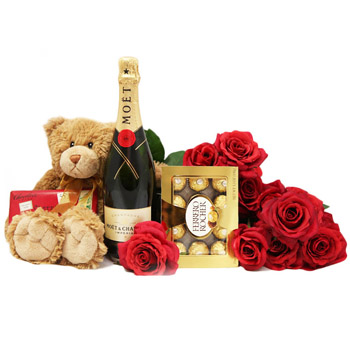 “I found this company after a horrible experience with ‘Pickupflowers’. My girlfriend lives in Denmark while im here in the U.S. and I wanted to send her something special and after reading some great reviews about ‘GiftBasketOverseas’, I decided to go forward with them. I would of given them five stars but couldn’t do that due to two small but annoying mistakes. First I asked numerous times and even included it as a special instruction requesting that when they call my girlfriend that they don’t tell her who the purchaser was, I at least wanted that part to be a surprise. All they needed to say is “we have a gift from a friend of yours and need your address” I didn’t mind the part of them calling her since I don’t have her address and asking myself would easily ruin the surprise plus I knew they would have to confirm she would be available for the delivery due to the nature of the gift contents. They assured me nobody calling her would even know who the purchaser is because the florist doesn’t have that information but what happens? I get a text from my girlfriend after their call to her bleeding with joy because somebody told her “hey we have a delivery from so and so and need your address” …well thanks!!! I mean I know she would of suspected it was me regardless but I could of played it off saying maybe the ‘friend’ is somebody else or a family member but nope, they took the joy for me right out of it! I still tried to play it off as best I could which didn’t work. I also should mention, my girlfriend told me later on that she did press the lady quite a bit on the matter BUT said it was mainly because the lady they had calling had a very harsh accent which was very hard to understand and she was almost ready to hang up on her, I understand this can be a touchy thing but maybe just consider having those of their home country call or use people with little to no accent. Secondly, they spelled my name wrong on the card and I confirmed several times that I submitted the signature correctly! Another small but annoying mistake because she wants to put this card up on the wall but it doesn’t look too good when it’s some random joes name on the card!! But all in all, my girlfriend was soooo overwhelmed with her gift and even though she knew ‘”something” was on the way, she had no idea it would be so beautiful!! I wish I could attach the pictures!!! The bouquet was full of lively roses amounting to between 35-40 roses after counting!!! Chocolates provided by the best Danish chocolate company in Denmark!! Surprisingly, good quality wine that we are waiting to pop together on my next flight out there!! and a nice teddy bear to top it all off!! And did I mention it came out $20 cheaper than with ‘Pickupflowers’ and it came with two extra gifts!! So overall, the good definitely outweighed the mistakes!!

Please view our complete gifts to Denmark catalog at www.GiftBasketsOverseas.com