Spring’s return means it’s time for two of the most significant religious holidays people can name! So we’re here to tell you the differences between Easter celebrations and festivities for Passover. The frequent overlapping of the Christian Holy Week and eight-day celebration of Passover merits attention. Like Christmas and Hanukkah, Easter and Passover are equally important and get a lot of attention. Side by side, they bring to light the deep structures of Christianity and Judaism.

Want to know what the main differences between Catholic Easter celebrations and Jewish Passover are without going into too many details? This video below will give you a pretty good idea.

Jokes aside, although these two holidays (which fall this year on the same day – April, 16), share similarities they are quite different in their meaning and celebration.

Easter Sunday is one of the oldest and most important Christian festivals. It commemorates Jesus’  resurrection following the crucifixion, according to the Christian bible. It also marks the end of Holy Week (the end of Lent) and of the Easter Triduum (Holy Thursday, Good Friday, and Easter Sunday). Many Easter celebrations portray the way the resurrection represents triumph of good over evil, death, and the physical body.

Passover (Pesach in Hebrew) is one of the most important religious festivals in the Jewish calendar. The holiday promotes a message about rebirth that aligns with the anticipated return of springtime, as well as social justice. According to the Old Testament book of Exodus, Passover commemorates the Israelites’ liberation from slavery in Egypt. Today, Jewish people remember Passover as a historical event, and as a celebration about their freedom as Jews.

Jewish Passover and Christian Easter celebrations both happen in early spring. Passover is traditionally held on the first full moon following the vernal equinox, which can fall in either March or April.

As the full moon can vary in each time zone, the Christian Church decided to use the 14th day in the lunar month instead (the Paschal Full Moon) and host Easter Day on the following Sunday. Once the Church knows that moon’s date, Easter Day is determined, but it always falls between March 22 and April 25. 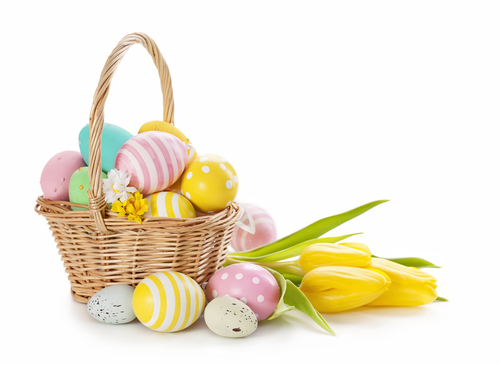 Bread and Wine are two main Passover symbols. While Bread symbolizes Christ’s body, wine is his blood. According to Christians, Christ’s blood is a promise that all the sins are forgiven. Jesus is the Bread of Life and sharing in the bread shows belief and hope for an eternal life.

Two of the main Easter symbols are holdovers from pagan traditions. Easter eggs are a left over from the Ester worship, and so are Easter bunnies. Both symbolize fertility and new life. Advanced egg decorators often use religious symbols like crosses to depict Bible stories and help teach younger generations.

Roast lamb is the traditional meat for the main meal for both Easter and Passover, though some Christian families can substitute ham which is more familiar and affordable.

Hardboiled eggs are also common during Easter celebrations, especially when they’re used to make colorful dyed creations for decoration or Easter egg hunting. Hot cross buns are another traditional Good Friday treat enjoyed all the way through Easter. These sweet rolls are usually made with currants or raisins, but toffee, apple cinnamon, and chocolate variations are also quite popular. The only rules for a good Easter meal is that it is shared with loved ones, and the day is filled with joy.

The main Passover ritual dinner is called Seder which actually lasts for 2 nights. Unlike the Easter menu, each item on the Seder table holds deep traditional symbolism. Often times each dish holds a special place on the plate, with room for at least six ritual items.

These iconic items include the shank bone which is one of the most striking Passover symbols. It commemorates the sacrifice the night the ancient Hebrews fled Egypt. Next there are karpas (green vegetables, usually parsley) which symbolizing spring’s freshness. Then comes charoset (a sweet salad with apples, nuts, wine, and cinnamon) a treat  that represents the mortar Hebrew slaves used to make bricks. After that, there is maror (bitter herbs, e.g. horseradish) a side that bring tears to the eyes and invokes the slavery’s bitterness. Finally, there is chazeret (a second bitter herb, most often romaine lettuce), and a roasted egg signifying the renewal of spring and hope after tragedy.

In addition to the Seder elements, perhaps the most important symbol on the Passover table is a plate with three pieces of matzah (unleavened bread). Wine also plays a significant role and is typically served four times during the Seder meal to represent four expressions of redemption.

Egg hunting is a popular activity for kids during Easter celebrations. And there’s a similar tradition during Passover, only instead of eggs Jewish children search for Afikomen, a piece of matzah bread wrapped in a white cloth. Whoever finds it receives money. The rest of the bread is eaten after the festive meal.